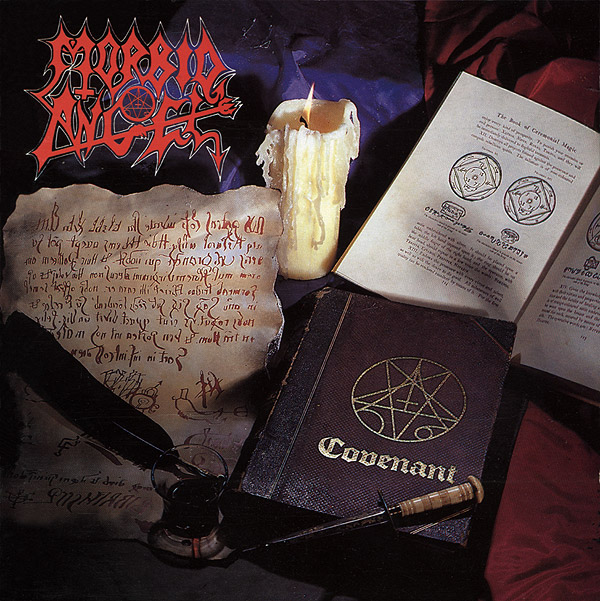 Very few albums deserve the cringe journo term "landmark in the genre". But this one does.

The iconic guitar composition here has a lot of what I call "caveman chromatism": Chromatic runs without too brain-y theoretical formula behind it. It's awesome when done right. Like in Covenant.

You can find examples of this, but done even more... caveman-y, in Korn's first record.

(Incidentally, Korn's "Ball Tongue"'s main riff is a straight-up copy of a riff in "Angel of Disease" from Covenant. Not a chromatic caveman riff, tho)

You can also hear some more recent examples of caveman chromatism in a lot of Meshuggah post-Koloss, e.g. Behind the Sun. I'm not a big fan of those. But by "The Violent Sleep of Reason," Meshuggah's caveman riffs had already gotten very good. Not even sure if I should call them "cavemen" anymore. Good, I love Meshuggah. But I digress.

Fun fact: Some say that Covenant's commercial success was a big part of what spurred the Norwegian BM scene to form. As a response. To keep metal under a kvlt.

Because, as you know, Norwegians blackmetallers are super baddasses and shit. Running in the woods with facepaint on... and then going back to their parents' house and living off Big Norwegian Nanny State, which in turn delegates its national security to the US military. Lololo.

Anyway, back to Covenant: If you're into these "modern" "atmospheric" / "darkened" death bands nowadays, and aren't too familiar with the past, you might be surprised by "God of Emptiness" from Covenant.

And, actually, this song even had a music video:

Is that crazy or what? It could easily be an Ulcerate track or something, released a week ago. But it's a 1993 track, and a commercially successful one. Music video and everything.

We're gonna have to get a lot crazier if we really want to "push the boundaries," boys, cos masters like Morbid Angel did a lot more boundary pushing than we tend to remember.